Ew! that Smell – The Dog Days of Sulfur 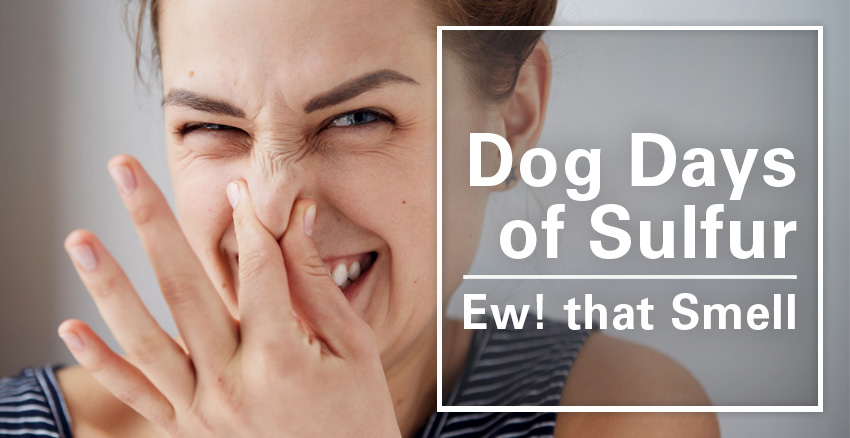 Is Sulfur in Your Well Water?

Have you ever turned on a water faucet and been bowled over by that smell, that very stinky, pungent, distinguishable smell of sulfur? So what is sulfur, and what does it mean for you, your water and your home?

There are two types of sulfur commonly found in well water: hydrogen sulfide and sulfate-reducing bacteria. Both forms are nuisances for domestic wells. Sulfate is a combination of sulfur and oxygen and is part of naturally occurring minerals in some soil and rock. The mineral dissolves over time, releasing into the ground water. Sulfur odor is produced when sulfur-reducing bacteria digests a small amount of the sulfate mineral expelling that “rotten egg” smell and taste.

Are there and health affects?

The Environmental Protection Agency (EPA) considers sulfur a secondary water contaminant, having no direct disease effect or threat to health. However, sulfate gives water a bitter taste and that ghastly smell of rotting eggs. It can have a laxative effect – that over time can lead to dehydration no matter how much water is being consumed. It can also be ingested in food cooked with sulfur-containing water. As well, it can cause nausea. Do not underestimate the power of sulfur. Summer may bring out its smell even more strongly, but don’t be fooled, it’s there faithfully through every season regardless.

What about your home?

Hydrogen sulfide can be highly corrosive to metals such as iron, steel, copper and brass. Because sulfur gas is very erosive and is released from the water, it can lead to damage of jewelry, copper plumbing and electronic devices. When it travels through water it sometimes stays in areas that lead to further problems. It accumulates in wells, pumps, washing machines, dishwashers, and water heaters,  which can lead to clogs, cause damage and costly repairs. Most water heater anode rods contain some sulfate. So, in the presence of sulfate-reducing bacteria, a rotten egg odor is created and is more noticeable from the hot water tap water.

It can easily tarnish silverware and discolor cooking utensils and laundry. Hydrogen sulfide can also cause yellow or black stains on both kitchen and bathroom fixtures. Coffee, tea, and other beverages made with water containing hydrogen sulfide may be discolored and have an off-putting taste. Foods cooked with this water can also be affected through appearance and taste. If a household has and ion exchange water softener, high concentrations of dissolved hydrogen sulfide can foul the resin bed. Sulfur is surely something we don’t need or want in our home’s water.

Testing for hydrogen sulfide can be difficult because gas escapes into the atmosphere rapidly. On-site testing is the most accurate method for determining hydrogen sulfide concentration, especially if the odor is excessive. Gordon Brothers Water also offers a free in-home test that can determine the amount of sulfur in your water supply. If after using this test, your water shows any signs of concern, you should take the steps to have further testing.

The EPA sets standards for secondary water contaminants based on taste, odor, color, corrosiveness, foaming and staining properties. There is no regulation by the EPA of hydrogen sulfide, so the treatment is really up to the homeowner.

Treatment options depend on which form of sulfur compound is in the water supply, either hydrogen sulfide or sulfate-reducing bacteria, and the quantities of the rotten egg odor-producing contaminants. Hydrogen sulfide treatment is with chlorination or aeration followed by filtration. Usually, treatment for hydrogen sulfide is the same as for iron and manganese, allowing removal of all three contaminants in one process.

The first line of defense is to have your home’s drinking water tested. You can’t know what’s in your water supply unless it’s tested. Bottom line. If you smell rotten eggs, taste something strange in your water or your water is discolored, if your laundry is discolored and dull, or your appliances are wearing out faster than normal, these are signs of sulfur, and other possible concerns in your water. It needs attention.

Do not hesitate to call Gordon Brothers Water at 800-331-7611 or visit https://gordonbroswater.com. We’ve been serving the tri-state area since 1945 and we will continue to be here for you, so give us at call today. After a free analysis, a water expert will be happy to work with you to find the best system for your home and your budget.  Everyone deserves the best water on tap. This summer let a clean, crisp, cool, healthy glass of water flow from your tap – so you can love your water again!!